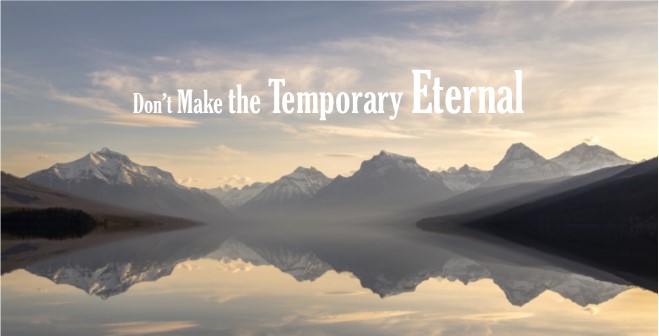 Most people are familiar with the convoluted sayings of baseball Hall-of-Famer Yogi Berra. Berra was the catcher, and later the manager, of the legendary New York Yankees. (A collection of his best sayings are in book form. Many books have been written with his sayings) Some of the misstatements attributed to Yogi include…

A nickel ain’t worth a dime anymore.

It gets late early this time of year.

If you come to a fork in the road, take it.

I usually take a two-hour nap, from one o’clock to four.

If you can’t imitate him, don’t copy him.

If I didn’t wake up, I’d still be sleeping.

It ain’t over till it’s over.

My favorite Yogi-ism occurred when a reporter asked him what he was going to do about the fact that he was in the middle of a batting slump. Yogi looked at the reporter with surprise and said, “Slump? I ain’t in no slump. I just ain’t hitting.”

There is undeniable wisdom in his perspective. It’s the difference between seeing your problems as a temporary situation or a permanent condition. “Not hitting” is a game-to-game struggle; a “slump” lasts indefinitely.

The Bible teaches that believers can strike the word “slump” and its equivalents from their vocabulary. We may face challenges, setbacks—even outright persecution—but we have God’s guarantee that it will not last. His words to Jeremiah apply to us today:

They will fight against you but will not overcome you, for I am with you and will rescue you. (Jeremiah 1:19)

I heard about a man who, during a difficult time in his life, kept in his desk drawer a legal pad with the heading “Things that will get

better.” It contained an itemized list of his many problems, and without exception, every one of them fell into the category of “temporary.” He referred to the list several times a week—and often several times a day—to remind himself that he wasn’t really in a permanent slump and that soon he would be hitting again.

Another man said that, as a child, when his mother couldn’t afford to buy him new clothes or expensive toys, she would remind him, “Son, we’re not really poor, we’re just broke.” He learned to understand the difference. Poor is a long-term label; broke is a temporary inconvenience.

Paul made reference to this mindset in one of his letters. He said…

We are hard-pressed on every side, but not crushed; perplexed, but not in despair; persecuted, but not abandoned; struck down, but not destroyed. (2 Corinthians 4:8-9)

I like the way the Phillips translation says it.“We are handicapped on all sides, but we are never frustrated; we are puzzled, but never in despair. We are persecuted, but we never have to stand it alone: we may be knocked down, but we are never knocked out!”

Norman Vincent Peale said that the difference between a problem and an opportunity is often just a point of view.